Today we remember thousands of soldiers, police officers and civilians
who have been killed in Israel's  years of constant violent struggle.

In Israel, everyone knows and loves someone who was killed in the military or in terrorist attacks.
This is a country marked by war, loss, and consistent threat of inhalation.

Israel lost 10% of its population in the first year of and a half of its existence and continues to lose soldiers in battle, police officers on the streets, and men, women and children to terrorism.

The mall where I buy my clothes was the target of multiple terrorist attacks, including a suicide bombing that was caught on film. I pass at least five memorials when I go to work. My family and friends and acquaintances bear the shadows of this loss - of glowing young people killed in wars, of fathers on front lines missing their child's birth, of missing family members.

In tribute, we stand for two minutes in silence in the evening, and another two in the morning on Memorial Day. The radios play songs of loss, the tears of a nation that knows all too well the pain of conscripting the vast majority of its young people.

There is a beautifully mournful poem about the sacrifice of life written by Natan Alterman. I have posted it below. When I look at our soldiers the poem echoes in my ears. This is the Silver Platter upon which the State of Israel is given.

…And the land will grow still
Crimson skies dimming, misting
Slowly paling again
Over smoking frontiers
As the nation stands up
Torn at heart but existing
To receive its first wonder
In two thousand years

As the moment draws near
It will rise, darkness facing Stand straight in the moonlight In terror and joy

...When across from it step out
Towards it slowly pacing In plain sight of all A young girl and a boy
Dressed in battle gear, dirty
Shoes heavy with grime
On the path they will climb up
While their lips remain sealed
To change garb, to wipe brow
They have not yet found time Still bone weary from days And from nights in the field
Full of endless fatigue
And all drained of emotion
Yet the dew of their youth
Is still seen on their head
Thus like statues they stand
Stiff and still with no motion And no sign that will show If they live or are dead

Then a nation in tears
And amazed at this matter Will ask: who are you? And the two will then say
With soft voice: We--
Are the silver platter On which the Jews' state Was presented today

Then they fall back in darkness
As the dazed nation looks And the rest can be found In the history books.

Fridays in the Netanya Market

Netanya is a lovely and complex city. It is the first city that is really outside of the central metropolitan/suburban coastal plain that centers around Tel Aviv. Israel's major commercial and business city is Tel Aviv-Yaffo, and around it are tightly clustered cities like B'nei Brak, Ramat Gan, Holon, Bat Yam, Tsahalah, Ramat Hasharon, and Herzliya. This area is called Gush Dan, and in it the cost of living and property values are very high. Tel Aviv is a vibrant and cosmopolitan city, but the cities and towns that surround it are not all that diverse.

I lived in Herzliya for two years and though I lived in a bit of a foreign student bubble, I found that much of the population in which I found myself was solidly Israeli.

In Israel, Netanya is known for several things:


I have come to love Netanya for its diversity and friendliness. Indeed, I very much feel that I live in a city of co-existing minorities. Due to lower property and living costs, the government funneled waves of immigrants from the former Soviet Union and Ethiopia outside of the Gush Dan area, and Netanya was, in my opinion, lucky to receive them. In recent years, Israel has experienced an influx of European (particularly French) Jews. Netanya is dominated by these groups. I will write more in the future about this diversity and post some pictures of this incredibly lush multicultural life.

This post is about one of my favorite places in Netanya - the market. Though many people do much of their shopping in conventional supermarkets, there is nothing to rival the excitement, color and thriftiness of the Shuk.

I go to the market at least once a week, usually on Fridays. I have my favorite butcher, vegetable merchant, bakery, etc.

One of my usual stops is this little shop. It is owned by a Russian family and is not kosher. For my purposes, it is the perfect place to buy dairy products and other packaged goods. 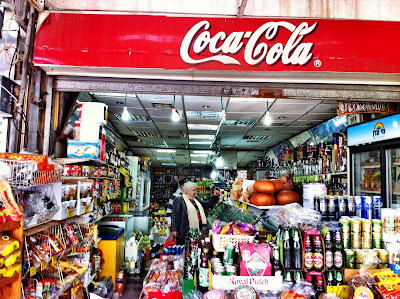 The deli cases are filled with all sorts of marvelous pickles, smoked fish, and all things Russian! 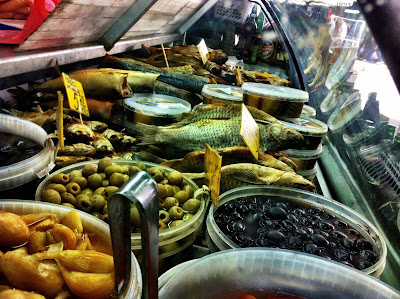 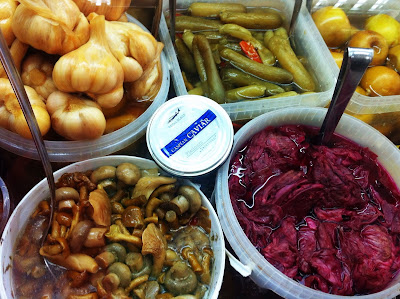 Israelis love nuts, and I have found that keeping some peanuts and pistachios around helps me to snack less. but more healthfully. I usually visit this stand in the very middle of the markets, belly up to the counter and order what I will. 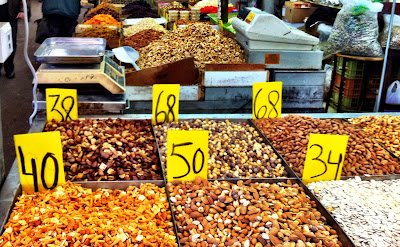 The fish guy is charming, kind, and patient even in the face of many rushed and combative Israelis. I have seen him take orders in Hebrew, French, and Russian simultaneously. In addition to Norwegian salmon, fresh sea bream and sea bass, he doles out cooking advice and kind wishes for a Shabbat Shalom. 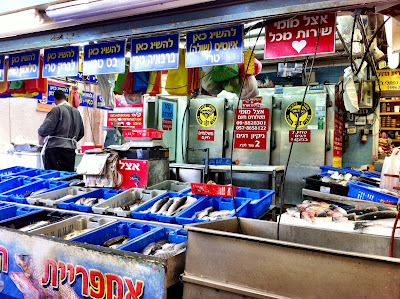 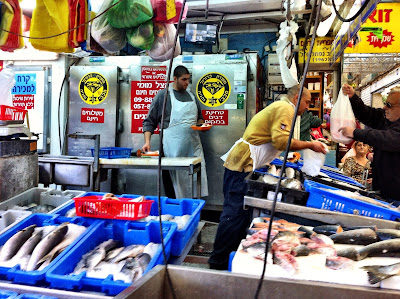 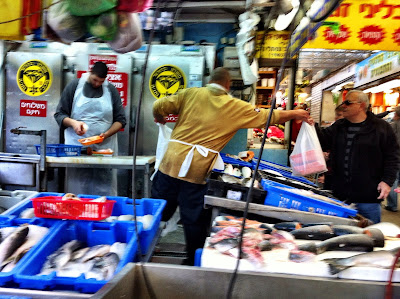 It is a bright, loud, and occasionally frustrating, but very worthwhile. 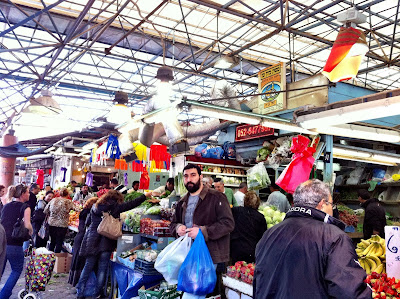 I am so inspired by these looks: 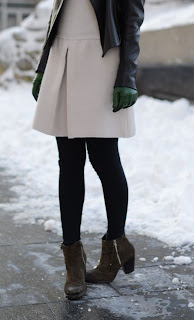 Email ThisBlogThis!Share to TwitterShare to FacebookShare to Pinterest
Labels: Fashion

A Few Little Peeks Into My Life

Here are a few little glimpses into my life. 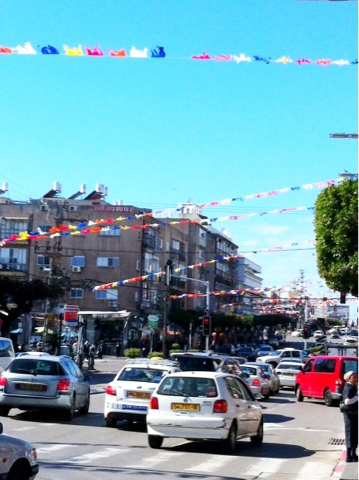 Bright bunting and sky in the center of Netanya 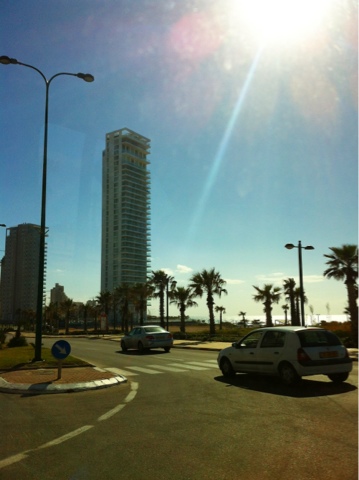 The Island Hotel just down the street from my apartment 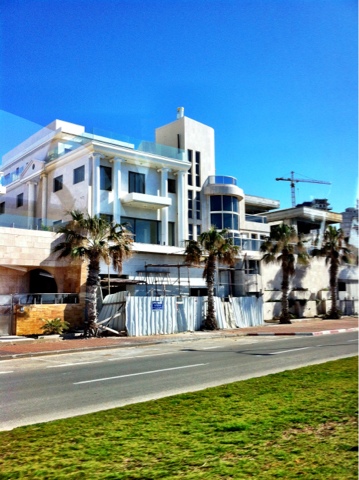 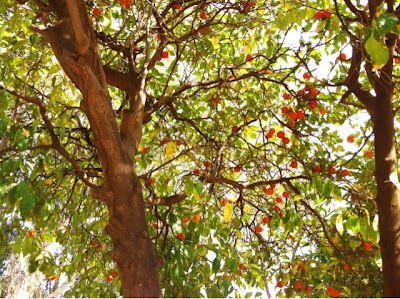 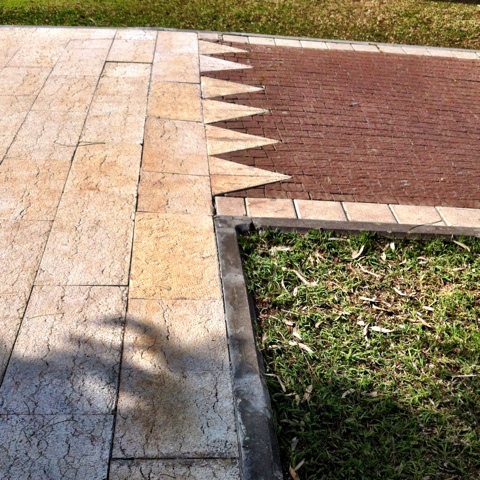 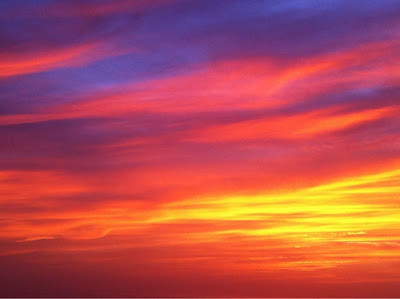 The sunset
Posted by YGirl at 2:48 PM No comments:

Ugh. What a title. I sicken myself.

But seriously, I've been trying to maintain a low-ish carb diet for several months and I can tell you that I wouldn't do it if I didn't feel so damn good! The trade-off that I have settled on is that I will reduce my carb and sugar intake, but drastically increase my protein and fat intake. I feel fuller, more energetic, and generally better. 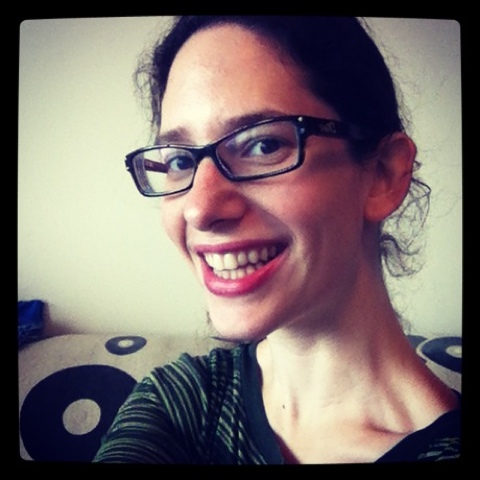 The most difficult thing is dessert. There have been some awful ones - a miserable almond and chocolate cake that closely resembled asphalt in both flavor and density. And I am cursed to forever remember the pancakes with the same appetizing texture as wet flannel. 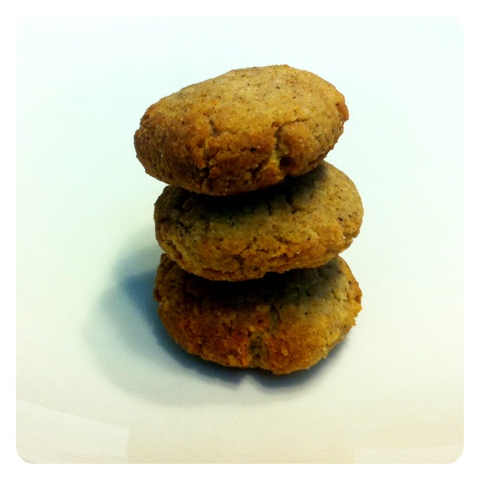 As such I have devised this recipe for little almond flour spice cookies. I cheated a little bit with the whole wheat flour, but I am convinced that they would be fine without it. 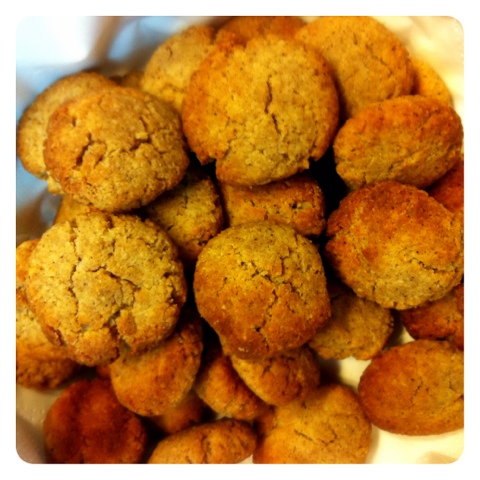 Please bear in mind that the measurements are all rather approximate. I hope I documented it all accurately.

Mix the almond flour, powdered coconut, baking powder,spices and dry sweetener in a bowl.
Pour in the melted butter and vanilla and mix.
Add liquid sweeteners and stir until combined.
Add the egg and mix until combined.
Add flour as needed to make dough that is easy to roll into balls.
Roll balls that are about ¾ of an inch in diameter and flatten lightly on a baking sheet lined with parchment paper.
Bake at 350F for 8 to 10 minutes.

DO NOT TRY TO REPLACE THE SUCRALOSE SWEETENERS WITH STEVIA.
BAD THINGS HAPPEN.

Email ThisBlogThis!Share to TwitterShare to FacebookShare to Pinterest
Labels: Food


Pfft. My neighbor is obnoxious.

Once again, clad in his underclothes, he scolded me for not managing my air conditioning correctly. I told him that if he has a problem, he should speak to me rather than shout at me.

To which he replied "I didn't shout at you! Last time I was speaking to you, and you started to walk off and THEN I started shouting."

I have begun to miss you once more!

Here I am in Israel, with all these thoughts, and a terribly neglected blog!

I will be better. I hope.

I found that the blog was motivation to do interesting things and improve my time management. And there are so many things to do!

Though I have a day job now, I will do my very best to post new and interesting things.

Things to look forward to:

Embroidery projects! Watch as YGirl learns new things, becomes fixated on the linen wonders of linen, and tries to sew things by hand that haven't been sewn by hand since the invention of the sewing machine! 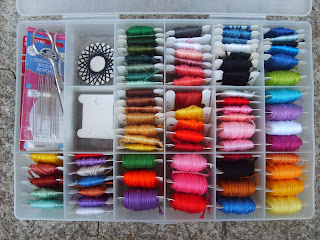 The annual Counter-Terrorism Conference! And related worrying about resume and business card design (seriously people, give me advice about business cards!) How stylish can I go before I look like a Helvetica-obsessed madwoman? How serious can I go without looking like a self-important pompous ass? Serif or Sans-serif? Black and white or should there be some grey in there? Or perhaps, God forbid, a color?!? Occasional outbursts about life in Israel! If you are lucky I will re-tell the great story of my altercation in a gelato shop. Bragging about Israeli healthcare. etc. 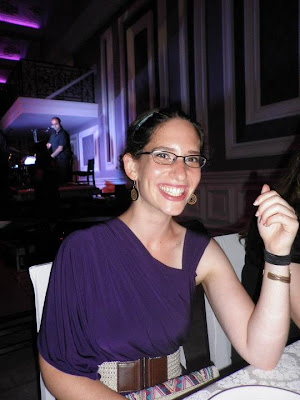